How Big is Your Ceiling Fan?

How Big is Your Ceiling Fan? 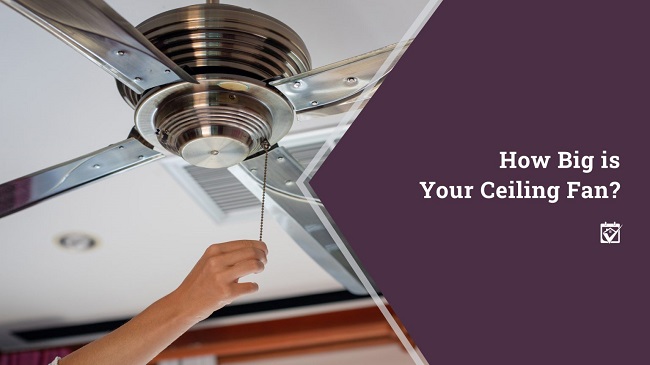 As the heat of summer approaches, having ways to stay cool at home is especially important. Installing new air conditioners or HVAC units can be expensive and may add significantly to your ongoing cooling costs as well. In many cases, a major cooling system upgrade isn’t even needed; simple things like the right curtains and ceiling fans in your rooms can go a long way towards keeping things cool even in the heat of summer. You just need to make sure that you’ve got the right fan for the space you’ve installed it in.

How Big Your Fan Should Be

To get the most out of a ceiling fan, it’s important that you choose a fan that is the right size for the room it’s going to be used in. If you’re underwhelmed by the effect that a ceiling fan has in one of your rooms, most of the time the problem is that the fan is simply too small for the space that you have it installed in. To make sure that you get the right fan for your rooms, it’s important that you know each room’s square footage; you can calculate this by measuring the length of the room, measuring its width, and then multiplying those numbers together.
Once you know the square footage you can figure out what size of a fan you need. If you have a smaller room that’s less than 144 square feet, you can get away with a fan with a diameter as small as 42 inches and not have any problems with it. If it’s more than that but less than 255 square feet, increase the size slightly to around 44 inches or so. If you’re trying to cool a room larger than 255 square feet, you’ll likely need to jump to a 52-inch fan to get the job done. Depending on the space, you may even have to install more than one fan (this is common in rooms larger than 300 square feet).

In most cases, ceiling fans are placed in the center of a room. This isn’t a hard and fast rule, however, and there may be situations where you’re better off placing the fan elsewhere. If airflow is blocked by something near the center of the room, you’ll want your ceiling fan to be placed where it can take advantage of the better airflow.
Another frequently overlooked issue with positioning a ceiling fan is choosing the vertical height of the fan. For ceilings that are lower than 8 feet, ceiling fans are typically mounted right to the ceiling itself. For 9-foot and taller ceilings, however, downrods are used in conjunction with ceiling mounts to ensure that the fan is in the optimal position for cooling. Most downrods that homeowners will encounter are around 12 or 18 inches long, but those with A-frame houses or otherwise very tall ceilings may need downrods that are 24 or 36 inches or possibly even longer.


Ceiling Fan Installation
Installing a ceiling fan may seem like a big job, and admittedly is might not be for the weak of heart. When it comes down to it, though, the entire process is likely easier than you’re expecting. You’ll have to install a box for the fan and a brace that connects to the framing in the ceiling. Once that’s secure, you’ll need to run wiring to the fan and attach a hanger bracket. Once that’s complete all that’s left to do is assemble and hang the fan itself.
If you’re confident in your abilities but you aren’t sure if you’re THAT confident, you always have the option of hiring a pro who can get your fan taken care of in no time.

Source: How Big is Your Ceiling Fan?

To continue searching, you must agree to the Terms of Use.

For the best experience, please provide your cell phone number and select accept below to opt-in to our Terms & Conditions and Privacy Policy to begin receiving text and voice communications.

or make a new notebook

Search the full MLS and Exclusive Property Listings.
(Prices and inventory current as of November 30, 2021)

Have a house to sell?

Find Out How Much Your Home Is Worth (optional)

We just need your phone number to finish creating your account.